The approach of my birthday, Mother’s Day and making room for my son to return home from college became an occasion for reflecting on family and creativity.

My twin sister Nora – of Noni Designs – and I were born at the beginning of May in 1967.  Our poor mother thought she was having one big boy.  Instead she got two tiny girls born six weeks early.  We were incubator babies, supposed to be Gemini (the doctor predicted a delivery date of June 12) but instead born Taurus.  Did that change everything?

We would have been Daniel if we were a boy and Nora if a girl. So my sister, who was first, is Nora.  May name Laura was hastily selected; I am named after my mother’s maternal grandmother.

This is what we looked like when we were born. Nora is on the left (I think). I always look at the lips if I am in doubt. 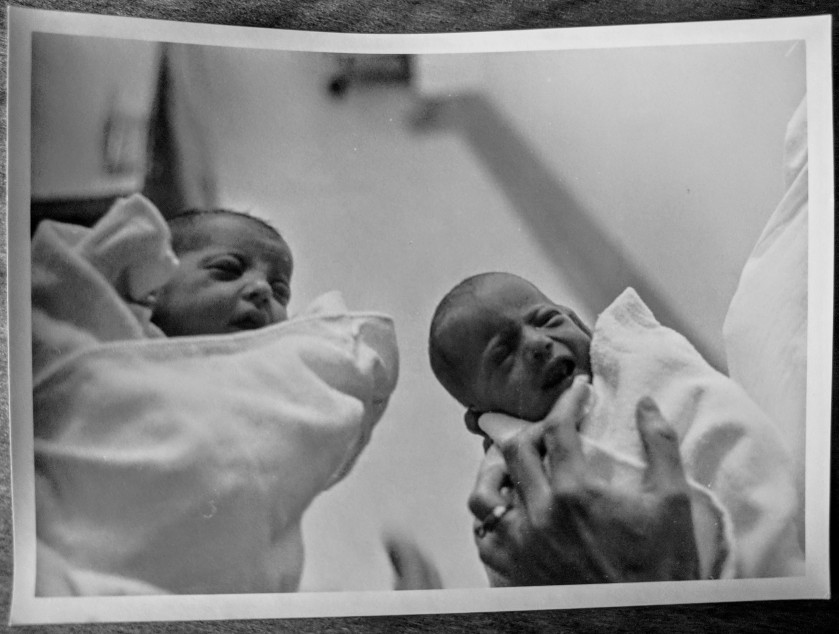 In later pictures it’s easier to tell us apart.

I have no idea who made these matching sets of ponchos and tams.  Maybe it was my paternal grandmother, who was an avid knitter in the English style.  But they could also have come from one of the aunts on my maternal grandfather’s side, who all knitted continental, having emigrated from Sweden. (UPDATE: Since I wrote the above, my mother has commented that she thinks they were made for us by our Auntie Jo.  Jo was fictive kin and an important creative figure in my life, and probably for my sister too.  Auntie Jo was the first artist I knew.  That is, she did more than knit and sew like the other women in the family.  Auntie Jo painted.  She made wood carvings.  She was in gallery shows.  And she made phenomenal pecan pie.  She was not a pretty woman. She would tell you this herself.  But she was beautiful to me and she had black hair until she died.)

My sister was a cherub.  I often appear mischievous.  In the picture below, knowing that, you can guess I am on the left. We must have been about 3.

PART OF THE EXTENDED FAMILY

You can pick out my sister easily if you look for the cherub.  She is on the right in my uncle Al’s lap (father’s brother).  To the left of him is Nancy, his first wife.  My mother is to Nancy’s left next to me.  And I’m on my father’s lap looking sullen. I like this picture.  It was taken in Boston before the family moved to Maryland when we were four.

And here are just the two of us during that same visit: 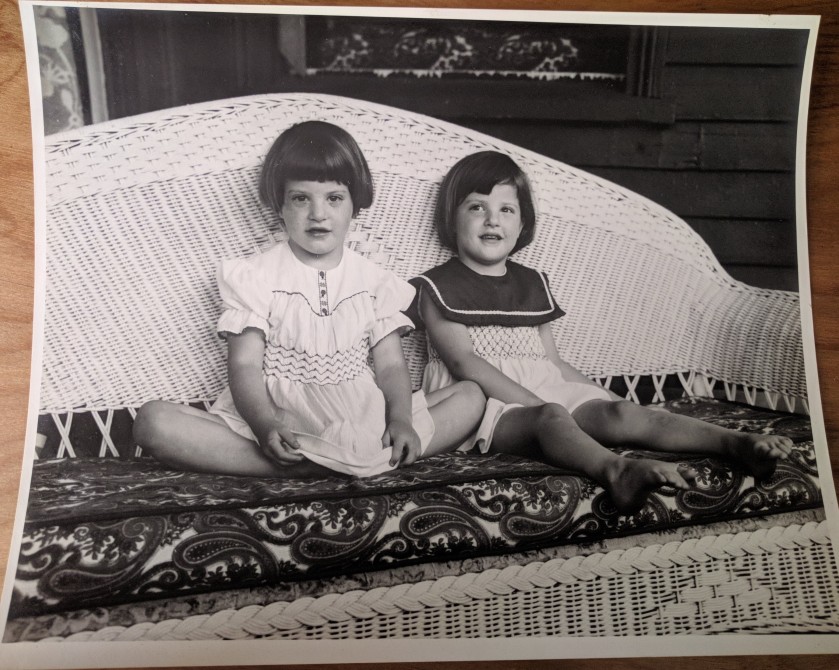 Me less intense, my sister distracted by one of my parents?

I started looking at these photographs because I had to empty the beautiful creative space I made for myself and about which I wrote some months ago. The reason: Julian is returning home but I’ll tell you that story in a different post.  The room was spare but full of treasures and I took my time compiling and moving, looking at each thing, letting the objects evoke past adventures, most of them with Julian. And I found an old book of photos, from which came most of the pictures here. The moment for reflecting on them was perfect because it was only days away from my sister’s and my birthday.  So I thought about my sister and our mother. I thought about our father.  I thought about my son and what it has been like to be his mother and to mother him differently than I was mothered, to raise him without a father.

And I thought about my first knitting project, which I gave to my father.