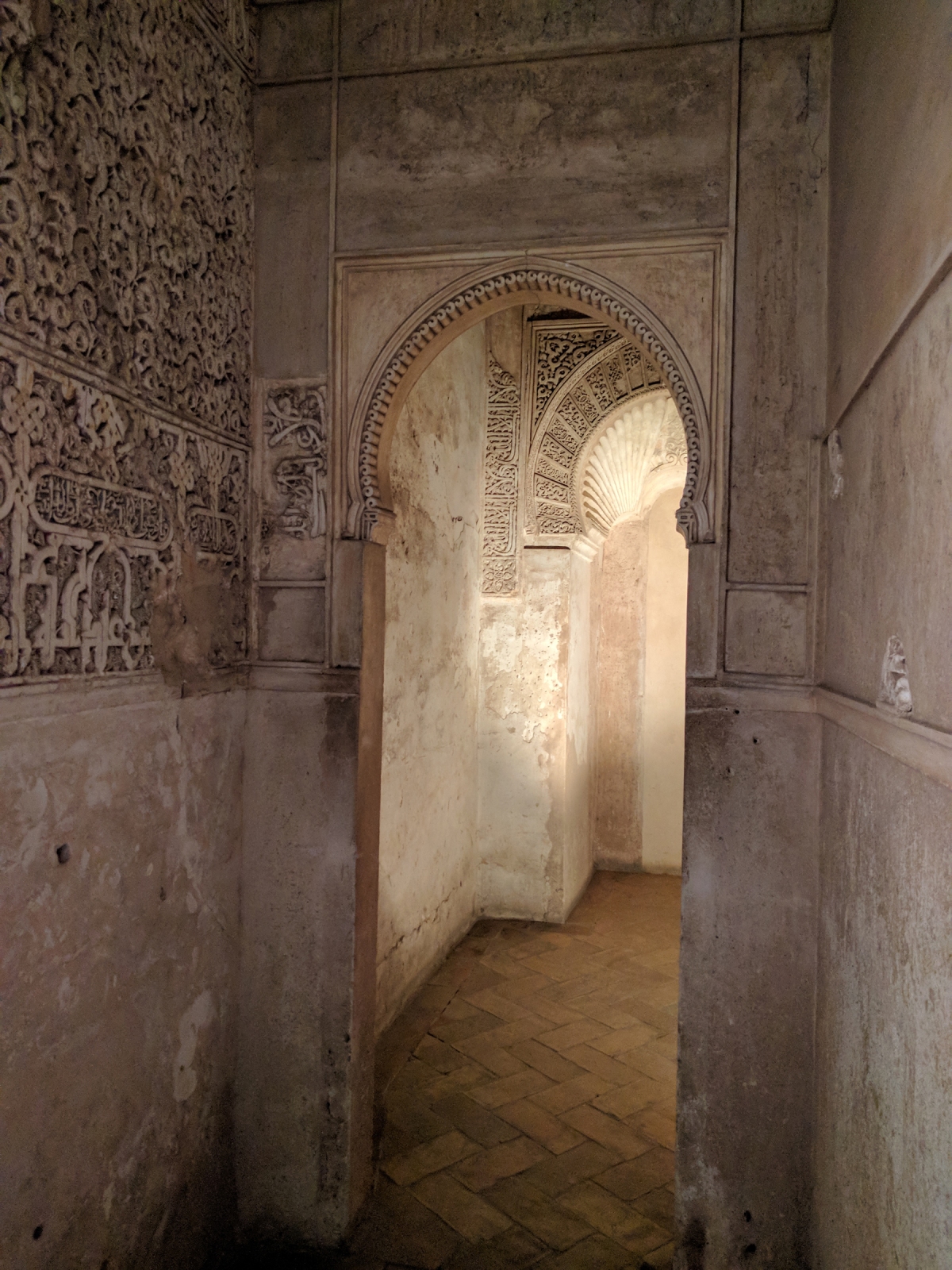 I was in southern Spain with my son Julian for 10 days, starting on the 16th of August.  My son is now 20 and I have just delivered him to the California College of the Arts.  We got off the plane from Spain on the evening of the 26th and got back on a plane for California early on the 27th. With the help of a friend living in California, I moved Julian into his housing that afternoon and now I am an empty-nester.  As a single mother for the entirety of his life, this represents a significant adjustment. I have no idea yet what the texture of that adjustment will be like. As a result of the timing, this trip with Julian to Spain has taken on a significance I am sure you can empathize with, even if you are not facing or have not faced this particular life-change. 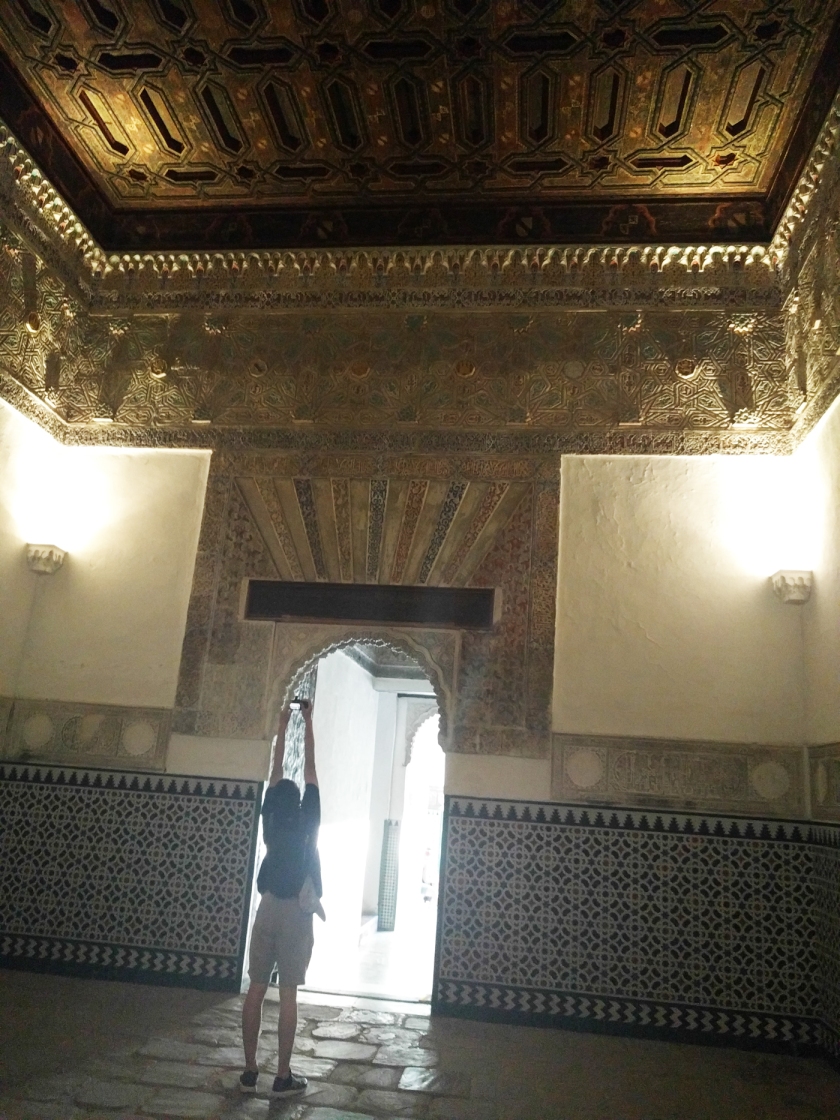 Image above: Julian photographing the ornamentation on a door in Alcazar in Seville, Spain.

The purpose of the trip was originally just business – to hunt inspiration for new JUL designs, both knitwear jewelry and accessories as well as the new line of body jewelry I am now developing.  I had to change the dates of the trip from April to August in order to participate in 10,000 Small Businesses.  I invited Julian to accompany me as a way to mark his departure from my home and his entry into a new phase of his life.  As Julian is an amazing young designer, (headed off to study Industrial Design), working with him on a new jewelry collection (or collections), based on Moorish architecture and ornamentation in southern Spain, was a perfect collaboration – a project we could work on together, the product(s) of which will be artifacts of this special time.

You will see them in the coming year.

Here are some examples of the shapes and motifs we encountered and which will be our inspiration and source material as we develop designs together.

My son and I became fascinated by the Mezquita in Cordoba for several reasons.  The building is massive, built on a site that had seen other religious structures for centuries. The exterior of the building is simple, high stone walls with massive reinforced doors.  It looks like a fortification. The interior is astonishing.  The columns and arches you see above just seem to recede to the horizon, creating a sense of magnificent, awe-inspiring infinity.

The columns that you see, which at first appear uniform, are varied in material and form, the cornices sometimes corinthian, based on the curving, elegant lobed leaves of the Acanthus plant. But some of the cornices are much simpler, depicting very different carvings and motifs. This variation impressed upon us the history of cultural and religious transformations that happened on this spot, and the ancient salvaging and repurposing that happened each time there was a change.  Why not use what was already there to create your own very different statement about the shape of the cosmos and the relationship between humans and the divine?

The repurposing and transformation in ideas about the universe is so gloriously represented in the combination of Islamic and Christian shapes and designs in the Mezquita’s interior.  How surprising and spectacular that inside the Mosque, Catholics built a church!

Image above: One of the Christian areas that made up the church within the Mezquita in Cordoba, Spain. 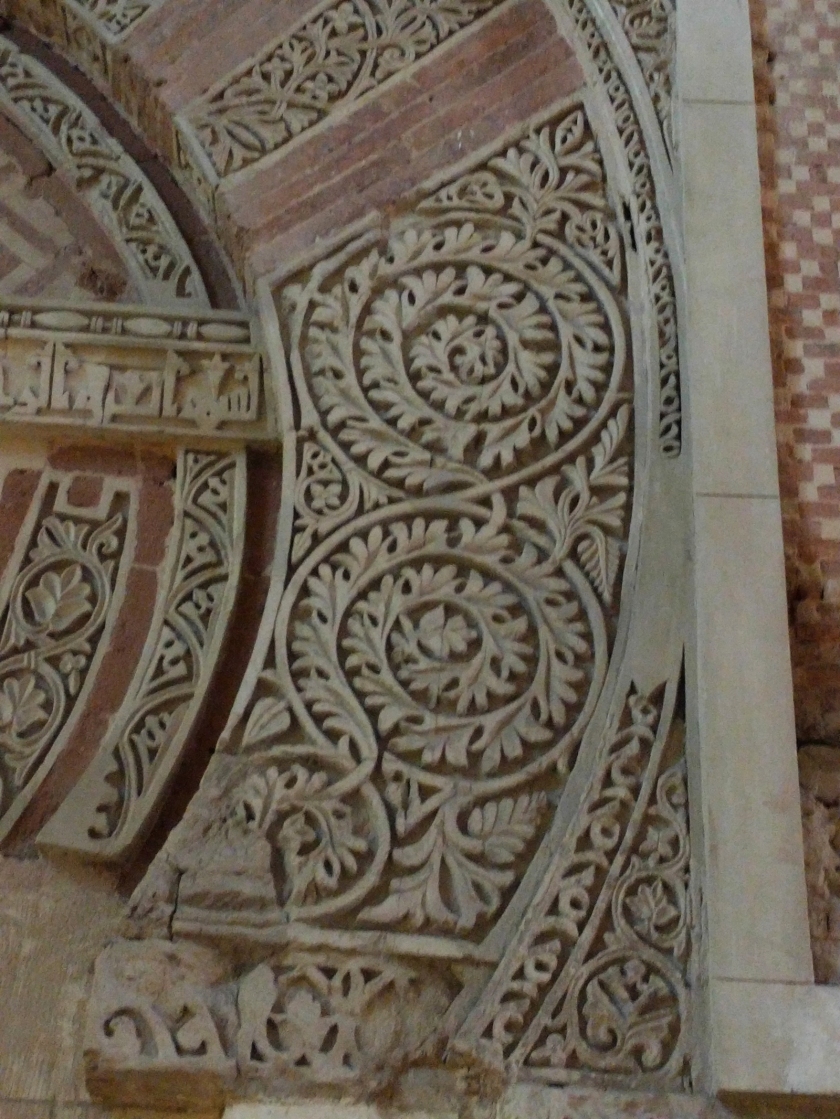 Here you see carved motifs based on the Acanthus leaf, a form that recurs in Roman, Islamic, and Christian ornament over and over.  The Acanthus plant is one of those plants that has an unusual range of powerful uses for early peoples and so it shows up again and again in recognition of its potency as well as the beauty of its form. 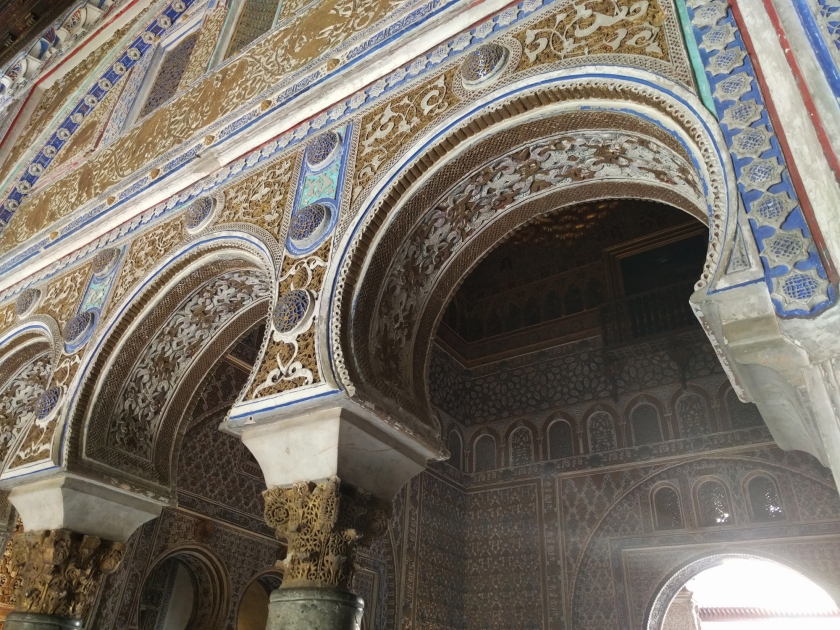 The Alcazar in Seville is absolutely stunning and was the first of these Moorish buildings that Julian and I visited.  The scale is smaller than the Mezquita as it was a residence.  Its carvings are elaborately painted as they were at the time when the palace was built.  In this way the experience of the space is very different from that of the Palace of the Nazaries in the Alhambra complex in Granada where the carvings are without color.  While the Palace of the Nazaries allows you to see the naked motifs clearly, the Alcazar offers a different kind of impression and visual power – inspiring with the ornamental carving, the exquisite combinations of one color and another, and color in relation to the ornaments it adorns.  I just wept at its beauty and I wept at the fact that I had the precious opportunity to experience such a place with my son. 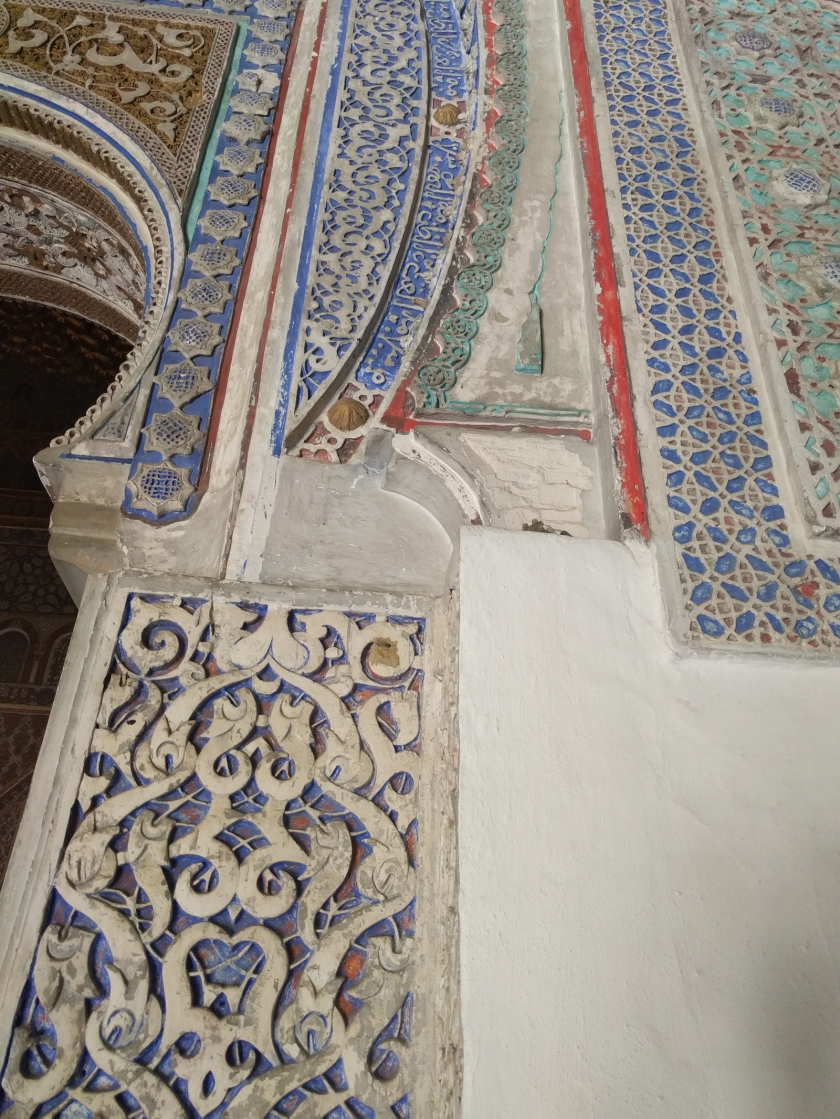 The gorgeousness of these spaces is amazing and becomes even more so when you abstract the ornament using frames – as in a camera or cellphone – that isolate particular relationships between the ornamentation and architectural form.  What we isolate in the frame is closer to the way we focus our eyes on specific juxtapositions we find fascinating and beautiful. And these juxtapositions are far more complex and varied, and personal, than the vistas in the photo book of the place.

I discovered on this trip how similar my son’s ‘eye’ is to mine. We frequently chose the same juxtapositions to photograph, though one or the other of us might execute it better.

How gratifying is that, to see your values and all of the lessons in being a person and viewing the world through a lens of art and design emerge, distinct and personalized, in your child after 20 years of eldering and asking “where does your eye go?”

Image above: Julian’s and my anti-selfie selfie at Medina Al Zahara, Cordoba, Spain: we are not blocking the view of the monument! 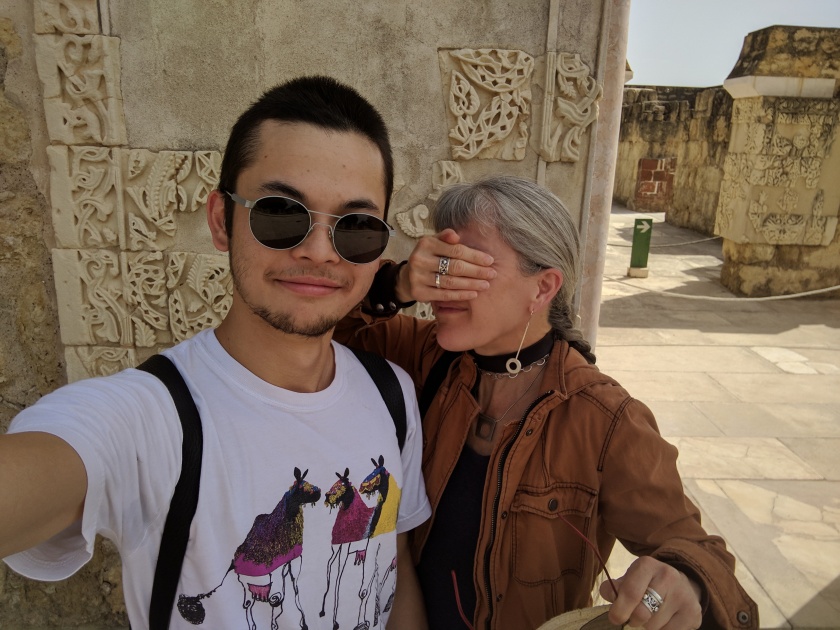 Image above: Julian and me at Medina Al Zahara, Cordoba, Spain.  We just can’t seem to produce a conventional selfie no matter how hard we try!  Here Julian caught me rubbing my eyes.  I find it funny that it looks like I am covering my eyes so as not to see something.  So not the case!

And we have not yet gotten to the Alhambra part of the journey . . .