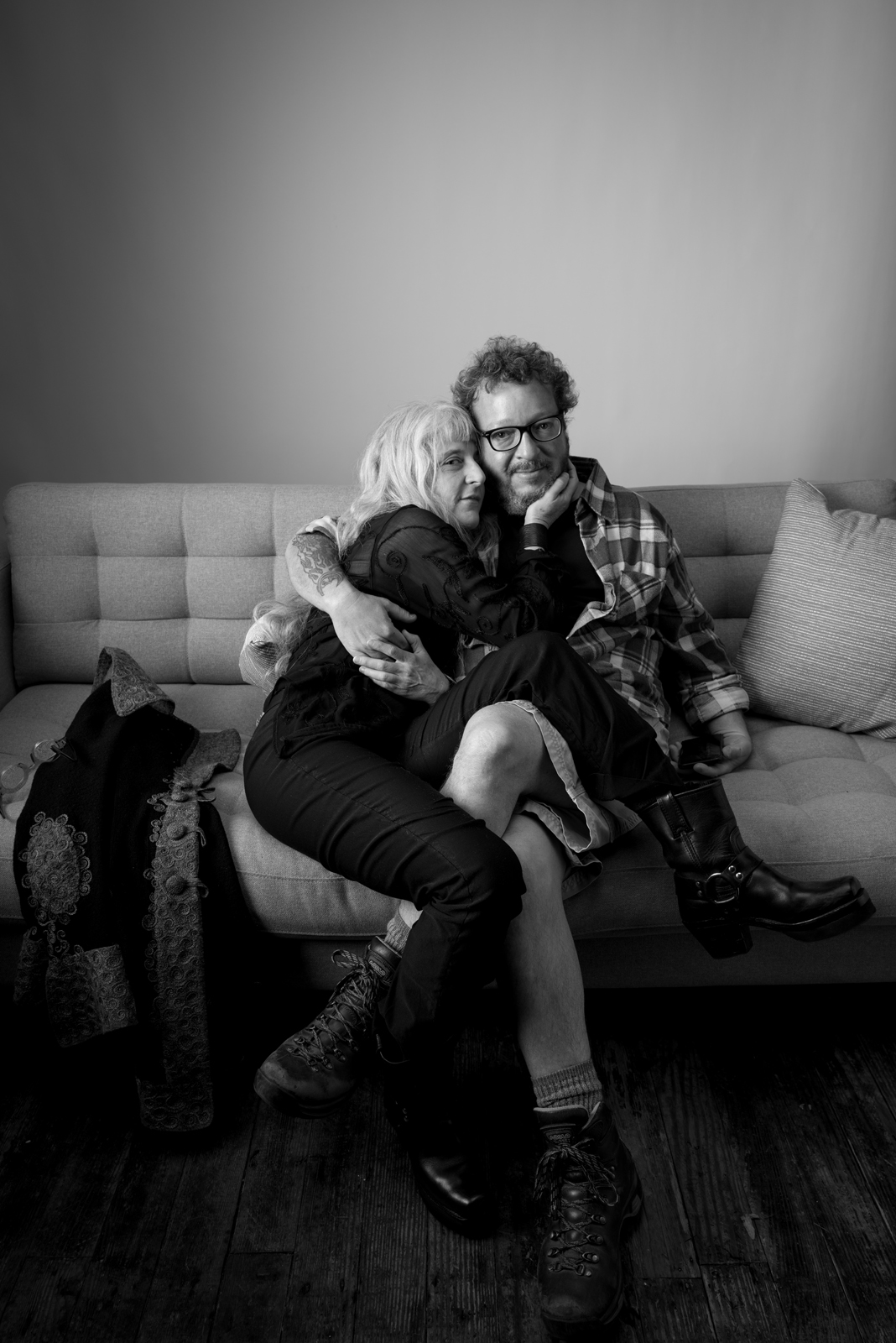 I bought it more than twenty-five years ago. It’s black georgette with a looping and gestural floral chainstitch embroidery, made with thread that’s a little glossy, making it either silk or a synthetic. The blouse came from a little boutique that sold things mostly from India, embroidered and sequined dresses made from velvet and rayon, and scarves and blouses in sheer fabrics like this one. I used to wear the blouse over a black bra and under a fitted jacket (which upon reflection did not fit me as the torso was too long, so the bottom of the waist hit at about my hips, causing a wrinkle at the base of my back and obscuring my shape). I stopped wearing it regularly many years back but kept it because it’s romantic and the sleeves are too long, which means they extend to my fingertips and drape at the wrist in a way I like.

I went to look for the black embroidered blouse the other day to wear it for some photographs with Bruce. We had no photographs of us together as he is always the one behind the camera and I wanted to document the time before the cancer treatment that will change him in ways we can’t anticipate. But when I went to my clothes rack to get it, I found the right sleeve in tatters, which confused me and made me sad. The rest of the blouse was not damaged. The last time I had gotten it out, also for some photographs with Bruce, the sleeve had been intact. I inspected the sleeve in relation to the rest of the garment to figure out if the fabric had finally begun to break from the stress of time.

It wasn’t time, unless the right sleeve aged while the fabric that made up the body and the left sleeve did not. Here is my theory. One night, after I returned from some weeks of travel this summer, I was awakened by a rustling sound. I didn’t know if it was in the room or in a dream at first but it recurred after I was fully conscious and it was in the direction of my clothes rack and sounded quite high up. I listened for long enough to decide that whatever it was it was not a threat to me. I got out of bed and turned on the light. On my clothes and on the floor was a confetti of shredded paper that I realized must be the work of a mouse harvesting the paper in the hangars from the drycleaner.  When I went to inspect, I found that several of the hangars were already stripped except for a fringe of paper around the wire. The one the mouse had just been working on was only partly gone; what remained was scalloped around the edges by the mouse’s teeth or claws. I don’t know how mice shred paper. It was making a nest.  Which meant the nest was close by.  I pulled out the leather satchel I had gotten in Florence and in which I had stored two pairs of long leather boots. I pushed the toe of one around inside the case and heard a tiny mewing. While I was trying to decide what to do, the momma jumped out and ran down the stairs. There were pinkies. I won’t tell you the rest of that story.  It’s not the point of this post. It creates the context for my theory that the right sleeve of my black georgette blouse was the momma mouse’s road to the paper in the hangars.

When my mother was newly married to my father, and before my sister and I ‘came along’ (as my father would say), she was working on a Master’s degree research project in Small Mammal Ecology.  She identified four distinct micro-ecosystems on the land of the cabin they had purchased in New Hampshire. In each quadrant she set live traps, baited with peanut butter, every evening.  Every morning she checked her traps and recorded the species of rodents she caught in which ecosystem.  She told me how she caught the same critters in the same traps over and over and that after she recorded the data and let them go, they always followed the same tracks away from the traps.  She described how the critter (maybe she was imagining a particular one) would run along the same log, jump to the same rock, scrabble up the same tree trunk, every time. Since then I have taken to calling my routines ‘mouse trails,’ and to describe adventures away from the routine as ‘getting off the mousetrails.’ Habitual and new ways of thinking, too, have been affected by this metaphor and have become old or new ‘mental mousetrails.’

The reality of these roads of routine became visible to me one spring. We had a heavy snow late in the winter that had frozen and persisted with a thick crust for a long time. It had finally started to melt and I had ventured out with S to take a walk around some historic battlegrounds and up onto the rocks at their perimeter. At the edge of the road we took I saw a tracery of impressions in the grass where the snow had gone and realized they were mousetrails beneath the snow, a maze of grass-lined tunnels with a roof of ice.  I imagined the entire field could be mapped like this with the imprint of habitual routes.

I think my sleeve became such a route, a delicate ladder to the top of the rack. I think she tested the suitability of fabric as nesting material at first and rejected it in favor of the paper There was a large, uneven hole at the wrist that didn’t fit together. There was fabric missing. The rest of the holes were tears running in the direction of the weft, like tiny rungs for a mouse’s feet.

When I discovered the damage I had a convergence of thoughts –What else can I wear for the photographs? I have no other blouses. I love this blouse. Should I repair the blouse? I’ll wear it anyway. It’s tatters became beautiful in a way to me then, a serendipitous lace. And then I thought – I am naked. I have no blouses at all.

A few details about my brilliant and dear friend and collaborator:

Bruce’s studio is located in Frederick, MD; you can follow him and find examples of his work on Instagram at @bruce_falkinburg

See the online schedule for Bruce’s changing roster of workshops.

In his own words:
Bruce enjoys both black and white fine art and modern commercial photography. He has a lot of cameras.

And I would add to that:
He also has a lot of lights.